Due to Covid-19, Worship Services, Sunday School, Lenten activites, and all in-person church activities
have been cancelled until further notice. See below for how to worship with us from home! 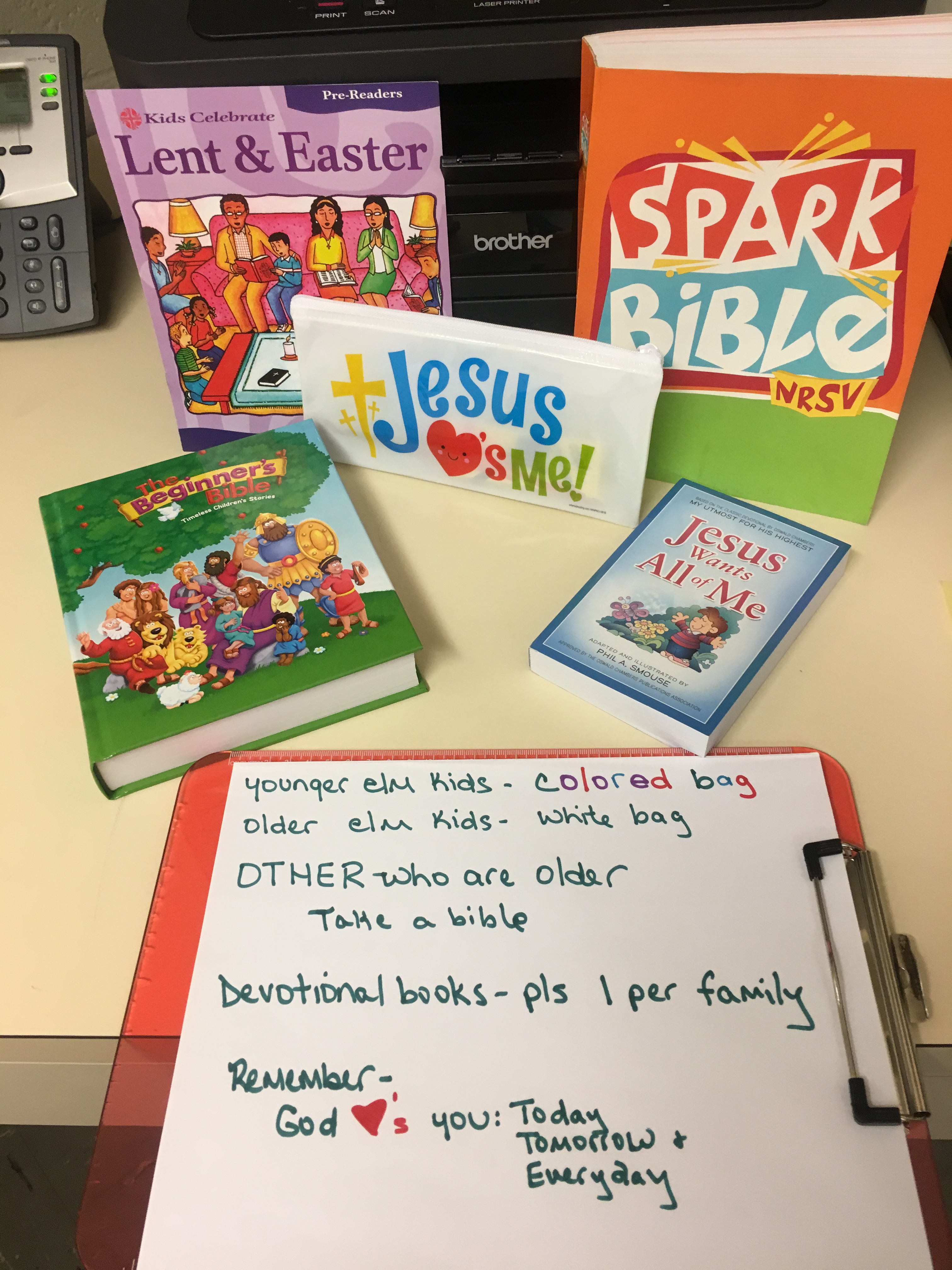 Bibles, activity books, Lent/Easter books, and crayons!
Come to the Potomac Street door and get your bag today! 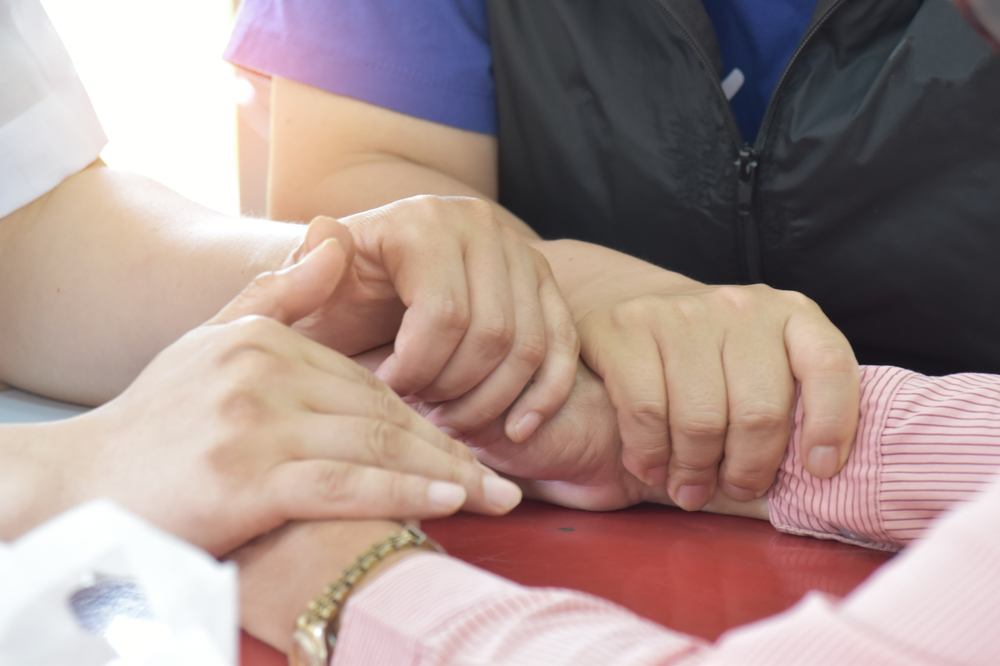 Ms. Angie has posted a message for the children of RELC. Click below to view!

Once again, worship has been cancelled at our church this coming Sunday, March 29. Because we cannot meet together face-to-face, here is a resource to help you join us all in shared prayer. Please be careful yourselves. And do pray together with all of us for our needy world.

If you wish, join in at 10AM on Sunday, March 29, praying separately in our homes, but together.

The following worship materials are available for this Sunday:

Children's Bulletin for the Fifth Sunday in Lent

We have also published the following to YouTube, all of which are available in a YouTube playlist:

Music notes for the Hymn of the Day and the organ piece are available here.

Ms. Angie has posted a message for the children of RELC. Click below to view!

Run—don't walk—to the box next to our bench outside of our church doors on Potomac Street!

Colored bags have children's bibles, a seek and find book, booklet on Lent/Easter, and a "Jesus Loves You" bag with crayons. Geared for our youngest

White bags have an older children's bible, a bible story/activity book, booklet on Lent/Easter, and a "Jesus Loves You" bag with crayons. Geared for Elementary aged kids.

NRSV bibles are in the box too. If you prefer one of those and not a children's bible with pictures/stories, then please switch it out.

Devotional books are in the box too. Just take one per family and share!

First off, I want you to know that I am delighted that you called me to be your pastor! Also, when I phoned my son, Nathan, later in the afternoon of the Call Sunday, his mother reported that he had a big grin on his face as I shared with him the good news of my call. My abiding thanks both to the members of the Call Committee and to the Congregation Council for shepherding a faithful process which resulted in my call to lead and to serve at Resurrection Evangelical Lutheran Church.

After my weekend with you all at Resurrection, I immediately made arrangements to move to Arlington on March 21, but then Covid-19, now declared a pandemic, intervened. “The best laid plans of mice and mortals….” Each time I have taken concrete steps to become your pastor, a crisis has interrupted the journey! On first blush, one might say that all of this is not meant to be. But I believe such a voice could well be that of the tempter, and not the divine voice. The paths that God’s call takes us on are seldom easy, uncomplicated ones. The biblical witness, from beginning to end, is rich with stories of harrowing holy journeys. The difficulties of the paths we are traveling together, thus, give as much evidence of the sacredness of what we’ve undertaken as anything else.

Once again, worship has been cancelled at our church this coming Sunday, March 22. Because we cannot meet together face-to-face, here is a resource to help you join us all in shared prayer. Please be careful yourselves. And do pray together with all of us for our needy world.

If you wish, join in at 10AM on Sunday, March 22, praying separately in our homes, but together.

The following worship materials are available for this Sunday:

Children's Bulletin for the Fourth Sunday in Lent

We have also published the following to YouTube, all of which are available in a YouTube playlist:

Dr. Melvin S. Lange, pastor of Resurrection Lutheran Church from 1958 to 1971, prepared the theological material for the artist, Roy Calligan, of the Hunt Stained Glass Studios in Pittsburgh, PA. The meaning of each of the seventeen windows is indicated by a Bible verse. The theme begins with the window to the left of the lectern (when facing the altar) and proceeds around the nave toward the back, and then forward on the opposite side toward the last window to the right of the pulpit.

We are a church that strives to do justice, to love kindness, and to walk humbly with our God (Micah 6:8). We do justice by serving our community through our social outreach activities and through contributions of finances and member’s time to local programs, including, for example, Lutheran Social Services. We provide opportunities for a rich Christian education to our members and to the community. Many of our members are active in synod activities and in ecumenical activities with other Christians.

We love kindness in the Christian work we do, often quietly but resolutely, for our members and for the community. Benevolence has always been a priority for our church, and we are a significant donor both in our financial resources and, perhaps more importantly to us, our member’s time. We are active with food assistance programs in the Arlington area and to other social service organizations.

We strive to walk humbly with our God in our worship services. We take liturgy, prayer, and music very seriously in our church as a path through which our parishioners can experience the word and sacrament in their lives. Finally, we are excited about offering the sacrament of communion to our parishioners at every Sunday service and believe it is important that we continue to do so.

The author of the text of this hymn remains anonymous, but it’s known as a traditional American folk song, first published in 1811. The text has remained basically untouched since it was first made popular by the Sacred Harp shape singers in 1844. Some hymnals leave out the stanza: “When I was sinking down,” and others include a verse that repeats the first verse with the last two lines “That Christ should lay aside his crown for my soul –What wondrous love is this, O my soul!”

The tune WONDROUS LOVE was first set to this text in William Walker's (PsH 44) second edition of Southern Harmony (1840). Publication of the hymn in B. F. White's The Sacred Harp (1844) further promoted the combination of text and tune. The meter of "What Wondrous Love" derives from an old English ballad about the infamous pirate Captain Kidd:

The tune, Southwell is found in many hymnals and most often paired with the text “Lord Jesus, think on me,” by Synesius of Cyrene, Bishop of Ptolemais. The tune was composed by William Daman (1540-1591), a foreign composer resident in England. There are a few conflicting reports on his origins, but contemporary London records describe him as an Italian from Lucca, Italy who arrived in England circa 1566 as a servant of Sir Thomas Sackville. In 1576 he became a recorder player at the Court of Elizabeth I.

After a proposed career in biochemistry, Colin Hand, the composer of today’s organ piece, turned to music, studying organ at Trinity College, Dublin. He has composed steadily throughout his career and spent fifteen years as a lecturer in further education and another fifteen years as an examiner for Trinity College of Music, London. His works comprise choral, orchestral and chamber music, with several pieces for teaching purposes. In the late seventies he spent time in research on Taverner and Renaissance music for a PhD.

From the Youth Director

At the beginning of August, the 2019 ELCA Churchwide Assembly convened. A number of decisions were made at that forum. Bishop Eaton was elected to a second six-year term. Patriarchy was declared a sin, and a sin in the Church, with the approval of the social statement, “Faith, Sexism and Justice: A Call to Action”. The ELCA declared itself to be a sanctuary body. A memorial was passed encouraging congregations to commemorate the 50th anniversary of the ELCA’s ordination of women in 2020.

The ELCA adopted the “Strategy Toward Authentic Diversity in the ELCA”, which consists of a report and recommendations on how the institution integrates racial diversity goals and outcomes. The ELCA declined to join the Poor People’s Campaign. The ELCA adopted a resolution supporting the World Council of Church’s “Thursdays in Black” campaign working to combat sexual violence. June 17th will be observed as a day of repentance in the ELCA for the martyrdom of the Emmanuel 9.

What I’d like to draw our specific attention to as a congregation is the Declaration of the ELCA to People of African Descent. On June 27th, 2019, the Churchwide Council of the ELCA adopted this declaration.

God’s Agent of Change conjures up images of a mighty band of superheroes with secret missions. When we take on the mission of being God’s agent of change in the world, we must be ready to be transformed – individually and together.

He escaped an F-5 tornado by a distance of 12 miles. A fifth grade boy’s knock on the door helped set the course of his career. He was known as Methuselah. He is fluent in Russian and an aficionado of spy novels. There’s a lot to know about our beloved organist and choirmaster, Roy Guenther.

Published in Music at Resurrection
Read more...
Page 1 of 2